In this context, it is known to all that the state ESCOMS have filed with KERC for revision of electricity charges.

The Karnataka Electricity Regulatory Board has published details through advertisements in newspapers and sought for objections from the public within 30 days.

Looking at the petitions submitted by them, the effect of power increase on the industrial and commercial sectors of our state will have a serious impact on the manufacturing and service sectors affecting the economic development of our state.

We would like to inform about that there will be a severe impact on 15,147 (HT) consumers and around 5,35,220 small scale industrial units in our state. Small industries account for 3.20 percent of total electricity usage in the state and employ approximately 40 lakh persons. Each employee is responsible for a family of four. That is, about 1.6 crore people are taken care by MSME reducing the burden of government in the area of food, shelter and education.

Similarly, HT users consume about 16.30 percent of electricity. As the electricity rates go up, the expenses in their businesses increase, and the companies will be forced to shut down.

It is to be noted that in the recent rate revision petition, the Government has issued an order to put the burden of retirement benefits to be paid to the staff of the Electricity Corporation on the consumers. Thus, consumers will have to pay Rs 3,353 crore in three annual installments.

Government has also issued order regarding liability towards Tannirbhavi of Rs.1,657 crores to be recovered from consumers through tariff hike. The total annual impact will be around Rs.1500 crores.

Federation of Karnataka Chambers of Commerce and Industry (FKCCI) has taken the lead to draw attention of the public.

The following ESCOM proposal is placed before the Karnataka Electricity Regulatory Commission for its consideration.

2. Withdrawal of the Special Incentive Schemes.

4. Withdrawal of solar water concession given till now to domestic users.

Some of these important points are being placed before you, and also related explanations will be provided to you.

We request that you convey our opinion regarding the above matter to the public through your esteemed media, so as to bring awareness among the public. 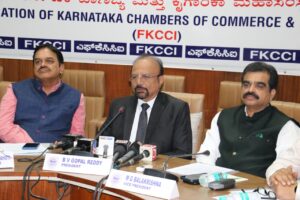